Another week closer to meeting baby Twinkle, only 8 weeks to go! I really need to start getting organised.

This week the baby weighs up to 4lb (1.8kg) and could measure around 45cm (18 inches) which is apparently the size of an armadillo! She should be getting herself into a head down position ready for birth and is still piling on fat and filling out. I have a growth scan and a consultant appointment tomorrow so it will be really interesting to see quite how big they think she actually is. It seems like my bump is quite low too, so fingers crossed she has settled head down!

This week has been quite a tough one and if I'm honest I have been quite fed up and for the first time really wishing these last few weeks of pregnancy would just hurry up and be over. I definitely have absolutely no pregnancy 'glow' whatsoever! The first few days were bad with horrendous sciatica and back and hip pain which meant I just could not get comfortable or sit still and I didn't really know what to do with myself! Just as that started to improve I started itching – not just on my bump which would be annoying but not entirely unexpected, but all over! I have already been tested for obstetric cholestasis (a pregnancy liver condition that causes severe itching) so was sure it wasn't that especially as I developed a rash (which isn't usually present with cholestasis). Over the space of a couple of days it got much worse to the point that I couldn't sleep or concentrate and was getting really irritable and miserable with it. I was sure it was just my skin being hyper sensitive and causing a pregnancy rash but the thought of another 8 weeks of intense itching all over driving me INSANE was not great! After extensive research (well, a lot of googling, that's what everyone calls research these days, right?) I started having a bath at night with just plain water with bicarbonate of soda added which really helped and also ordered some products from amazon that would allegedly help. When the delivery driver arrived yesterday morning with my parcel I think he was a bit taken aback as I was ridiculously happy to see him! The photo below shows what I bought and I have to say they have all really helped. The soap smells quite woody and smoky (a bit like a bonfire!) but it's not entirely unpleasant and fortunately the smell doesn't linger on my skin afterwards, it just leaves my skin feeling very clean and soothed. The powder is a bit grainy but really helps and the menthol cream is really cooling for short term relief.

Here are photos of the rash on my arm taken on Tuesday morning (left) and Wednesday morning (right) which show an improvement already. 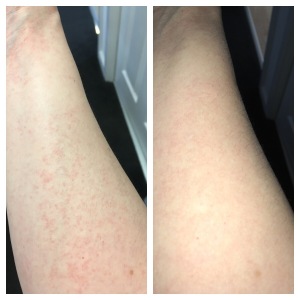 The best thing was I managed to sleep so much better last night so I'm definitely improving thank goodness and I feel a lot more 'normal' and less like a crazy person who wants to scratch their own skin off! Hopefully both the itching and the rash will ease off or at least I will manage to keep it under control now.

Tinker and Totsy have been super cute with the bump this week, kissing and stroking it and talking to baby Twinkle – I think Totsy has finally accepted it's a baby in there and not a chicken as she kept saying a few weeks ago!

My craving this week has been Rice Krispies – I could happily eat them for every meal! To be honest, I seem to eat constantly although I can't manage to eat as much in one mealtime anymore, I get full quite quickly, I think Twinkle is taking up all the room. But I certainly make up for it by constantly grazing!

Don't forget to catch up with my 31 weeks pregnancy update from last week if you missed it.

Disclaimer – there is no incentive whatsoever for me to mention the products listed, they are just what I bought and would personally recommend.