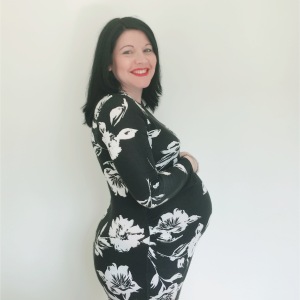 So the countdown is now into single figures as there are only nine weeks left to go until we meet little baby Twinkle. Which really doesn't sound long at all!

This week she is about as big as a Romaine lettuce, might measure around 44.5cm and could weigh over 3.5lbs (1.6kg) but will be busy putting lots of fat on for the next few weeks until birth. I'm hoping she will be a nice little petite 6lb baby, but I think this is unlikely, with her last three sisters all being well over 8lb!

I am feeling ok, getting quite tired and breathless these days and of course still struggling with my back, though I have good days and bad days (this weekend my back actually felt great for a couple of days, which was lovely, though unfortunately it's as bad as ever again now). I think carrying so much extra weight is really taking its toll now and things like carrying Totsy or climbing stairs leaves me struggling and my feet and legs ache pretty much all the time. My sleep is disturbed every night by needing to get up for a wee or turning over (which is no easy task these days and takes a few minutes and a fair bit of huffing and puffing each time!) and if I'm honest I'm reaching the stage of pregnancy when I'm really looking forward to the end of it. Feeling so tired and the simplest of tasks being difficult gets quite frustrating after a while! Even after all that moaning though, I'm still trying to make the most of it as I know this will be my last few weeks of being pregnant ever (no-one believes me though when I say that this is definitely the last time as I've said this during my last few pregnancies too!)

Baby Twinkle is still quite active (I'm still waking up to lots of kicks during the night though, so I'm convinced she's nocturnal!) and I'm getting lots of Braxton Hicks contractions (some of which make my bump look extremely lopsided which is quite funny!) She also quite often pokes out a little foot or a knee or an elbow which is quite strange to feel and try to work out what it is.

My maternity clothes are getting quite tight now so I'm hoping I'm not going to get too much bigger (wishful thinking!) My bump looks quite a lot like I've got a basketball up my top and a few people have said that I'm 'all bump' but at the same time I'm very aware that I have gained weight all over and although I won't be in a panic to lose the weight immediately I'm pretty sure it will take some hard work to get to my pre-pregnancy size. Almost everyone is still shocked when I say I have still got nine weeks left, and no one (except me!) seems to think I will make it to my due date (though I've got so used to the horrified faces, when the lady in the cafe at Tinker's gymnastics class didn't look shocked at all and simply smiled and said 'You look great' when I told her how long I've got left, I actually wanted to kiss her!)

At the weekend Mr T had a hunt around in the loft to see if we had kept any of Totsy's baby clothes. I was convinced we had only kept a couple of sleep suits but actually we had kept quite a lot, I was thrilled! It was so lovely going through them all. We just need the next nine weeks to hurry up now so we have a baby to put in them.

Don't forget to catch up with last week's 30 weeks pregnant update if you missed it.