Luna turned 3 months old this week so I thought it was time for a little update on how we are getting on. Although it is hard to believe that the months are going by so quickly, it is also impossible to imagine life without her.

She has fitted into our lives seamlessly, although it’s fair to say it’s pretty hectic at times! I’m still exclusively breastfeeding which can be pretty time consuming but I’m planning to carry on for as long as possible. I express when I get a chance so I can build up a stock in the freezer in case I’m ever persuaded to leave her for a night out (so far if we do have a rare date night she comes with us!) and she has a bottle of expressed milk a few times a week just to get her used to taking a bottle. I haven’t had her weighed for ages but she is definitely thriving, she is filling her 3-6 month clothes and has lovely chubby cheeks!

Sleepwise, she is still doing really well at night, she now goes to bed around 9.30 – 10pm most nights and about half of the time she sleeps through till 6am or later, and half the time she will have a feed around 4am or so and goes straight back to sleep. Believe me, I know just how lucky I am that she’s such a good sleeper! We don’t have a strict routine, it is very much about just going with the flow – sometimes she will have long gaps between feeds and sometimes it feels like she is permanently attached to the boob! Basically, if she cries I feed her.

Luna is just such a happy, smiling baby and everyone just adores her as she has a smile for anyone that talks to her. Tinker and Totsy love chatting to her and she saves her biggest smiles for them. She makes lots of little baby gurgling noises too, so it sounds like she is trying to have a conversation and she is really trying to chuckle now so those first little baby giggles won’t be far away. She loves to stare at her hands, push up on her legs, (she is really strong, I think she will really like her Jumperoo in a few weeks) and loves her cot mobile.

Despite the fact that it can get pretty crazy and frantic at times, and life usually feels like one big juggling act, I have to say I am absolutely loving these baby days. Of course there are days when it all gets a bit much when the baby is feeding all day, the girls are squabbling and Mr T is working late and its fair to say my house is nowhere near as clean as I would like but I really wouldn’t change it for the world. When the three littlest girls are splashing around together in the bath, or when Luna is sleeping in her pram and Tinker and Totsy are running around the park giggling together or when we are all snuggled together on the sofa for movie night then I quite often just take a moment to stop and realise how lucky I am (so bloody lucky!) 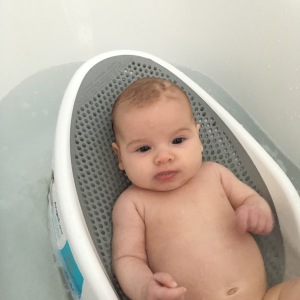