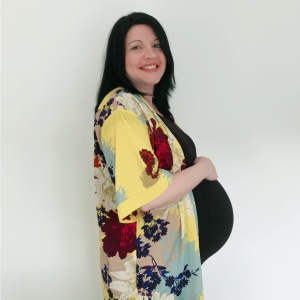 It's hard to believe I'm nearly at the end of my pregnancy journey, less than 3 weeks to go and Twinkle will be here. To be honest I'm so ready to meet her now!

This week has been quite stressful, I had a scan last Friday which showed that Twinkle is growing nicely (approximate weight was 6lb 15) and is on track to be somewhere around 8.5lbs which is a very similar weight to my last three girls. Unfortunately though she was still changing position a lot – just during the 15 minute scan she moved from head down to transverse to oblique breech! Her 'unstable lie' put me at a very high risk of cord prolapse if my waters broke and I was told to dial 999 immediately if my waters went as it is classed as an obstetric emergency.

This made me feel a lot more anxious than I usually would at this stage and I was left hoping I didnt go into labour just yet! They booked a presentation scan for this morning and I was told to bring a hospital bag with me as if things were still the same with baby's position I would be admitted to the ward until she is born as the risks associated with cord prolapse are just too high!

We didn't want a fuss or to worry our families about something that might not happen so we didn't mention the threat of a hospital stay to anyone but I spent the week feeling quite anxious, desperate to avoid a prolonged hospital stay and bouncing on my gym ball hoping to get her in a good position. When I went for my scan this morning it was a HUGE relief to be told that she was now head down although the sonographer was concerned that her head was still quite high and there was a lot of fluid around her making it likely that she could still move. Fortunately my consultant had a feel of my belly, declared the head as not too high and I avoided having to stay in! Thank goodness for that!

I have been booked in for a sweep on 30th June (2 weeks today!!) and then induction on 3rd July which is so exciting! I feel so lucky to have a fantastic consultant who is so down to earth and although careful to minimise the risks she also is super supportive of vbacs even involving induction, which I know is not always the case (but I have had 3 hugely successful induced vbacs which shows there is no reason why not).

So not long to go at all, which is great as I am feeling so slow, heavy and uncomfortable now, my back and hips are constantly aching. Even climbing the stairs is enough to wear me out and leaves me out of breath and I'm getting so utterly frustrated with not being able to do much now, Mr T is absolutely amazing and helps so much but I just hate being so dependent! The hot weather is really not helping either, my swollen feet are getting worse and I'm just hoping my old ankles will emerge from these cankles after the birth (although from past experience I know they are likely to get a bit worse in the first few days after birth before then getting better!) I'm pretty tired too, I usually spend all day feeling shattered and then struggle to sleep when I do finally get into bed, which is a bit annoying. Though I guess not sleeping so well is excellent practice for when baby is here!

We have been gradually getting everything ready for baby and I feel like we are finally there, more or less! We spent Sunday getting the nursery ready, Mr T got the last few things down from the loft for me to wash and we rearranged the furniture in the nursery (which used to be Totsy's room until she moved into bunk beds in Tinker's room) and put all her clothes in the wardrobe. I feel a lot more mentally prepared for her arrival now and the threat of a hospital stay meant I even packed my labour bag last night. It's all starting to feel very real!

My last day at work was Monday so I am now officially on maternity leave, which I have mixed feelings about, it just feels a bit strange at the moment. It is nice not to have to worry about work but at the same time it's always pretty full on at home with the kids! Especially as the terrible twos seem to have hit Totsy with full force all of a sudden! Just doing the school run is exhausting as she attempts to run off and throws herself to the floor over every (usually imagined) injustice (e.g. having to hold hands to cross the road, having to give Tinker her school bag to go into class, not being able to actually go into class with Tinker 'me go school too', someone walking ahead of her, having to get in the car to go home etc etc) Fortunately she still naps and will still be going to her childminder on Mondays just for the next few weeks as well as a few visits to Grandma and Grandad's so I will manage to put my feet up at least a bit before baby arrives. Not long now………

Don't forget to catch up with last week's 36 weeks pregnant update if you missed it.