On 4th December me, Mr T, Milly, Tinker and Totsy had a lovely day out at Winter Wonderland. I had booked tickets for some of the attractions months ago and we had been really looking forward to it. However as it got closer we had all had coughs and colds, we had been ridiculously busy in the week before and our kitchen refit was well underway and was making family life just a bit more difficult. We all felt in desperate need of some down time, a pyjama day was very attractive and to be honest we were less than enthusiastic about an early start on a Sunday followed by a day traipsing two little ones around London! However, the tickets were booked so we dusted off some enthusiasm and off we went!

We left the house at 7am, for a two hour drive to Watford Junction where we got the train to Euston. We always choose this route for a day in London, as it is easy for us to get to, easy and cheap to park and only a short train journey into London. The car journey was the usual chorus of 'are we nearly there yet?' and doling out snacks, but was otherwise uneventful. We made it with a reasonable 15 minutes before our chosen train (though trains run to Euston regularly from Watford Junction so this wasn't too much of a concern) and the train wasn't very busy so getting us all in with the buggy wasn't a problem at all.

At Euston we got in the lift to the Underground and headed to Green Park. 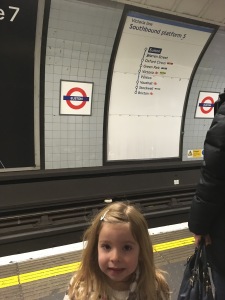 Again it wasn't busy, so getting the buggy in was not an issue and a few minutes later we had arrived at Green Park. A short walk later with a quick stop along the way at Pret A Manger for coconut milk lattes and almond croissants (and juice and muffins for Tinker and Totsy) and we'd arrived. And it was only half past 10! Anyone that knows is used to us being late for everything, so to have arrived with half an hour before The Sooty Show, we were quite pleased with ourselves!

The queue at the gate was very short and it took less than 2 minutes to get through the bag check. We spent a few minutes getting our bearings, Tinker's eyes growing wide with excitement as she looked around and saw fairground rides and bright lights on all sides, while Totsy chanted 'Out! Out!' and struggled to free herself from her buggy harness.

The Sooty Show was in the circus tent, so we parked the buggy (plenty of space in the buggy park right outside) and went inside. Tinker quickly spotted the numerous people selling merchandise and so Mr T dutifully forked out twelve quid for a Sooty puppet (which once the Sooty Show finished she hasn't so much as glanced at, so you can draw your own conclusions as to whether we think that was a good buy or not!)

The show itself was fine, very reminiscent of the TV show I remember as a child, Soo is still a smug brat and Sweep is still an unruly terror and no-one seems to have attempted therapy with Sooty as he's still selectively mute but Tinker enjoyed it and Totsy enjoyed running up and down our half empty row so it was fine (apologies to the people in front of us though, who she kept poking in the back, sorry about that). At one point Richard did head into the audience with a water pistol (egged on by Sweep, of course) and while everyone shrieked and ducked Tinker just quietly and calmly reached out for her coat, unzipped her hood and put it on, which made me laugh more than it should have (and obviously demonstrates excellent problem solving skills!) 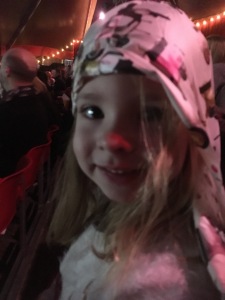 Neither of the girls has a very long attention span so by the end of the show they were getting a bit fidgety and fed up, there was a bit of musical chairs as they decided they wanted to change seats (a few times) and a bit of 'Shall we just go now?' for the last few minutes, but thankfully the show itself wasn't too long (I think it was around 35 minutes) so it was over just in time and we quickly headed outside.

At this point, I made a classic mistake. Aware that Totsy had been cooped up in the car, then the buggy, then had restricted space in the show, I uttered the words 'let's leave the buggy and let her walk for a bit'. Normally, Totsy is a great walker, she holds your hand and just goes where you take her, so this seemed like a reasonable idea. Firstly, she refused to hold hands. I'm not sure if it was all the distractions but she wasn't going to walk nicely and go where we wanted. She wanted us all to follow her (quite often in circles) and if we tried to guide her in any particular direction she screamed. As she wouldn't hold hands, I attempted to hold onto her hood but this enraged her until she realised that as her coat was secured only by popper fastenings she just had to pull away from me hard enough and her poppers would come open and I was left holding an empty coat and she was free to go wherever she wanted (usually in a circle around Hook-a-Duck). This game got repetitive and tiresome quite quickly, especially as Tinker was keeping up a constant 'Can I go on that ride? Can I go on that ride? Can I go on that ride?' Eventually I was muttering through gritted teeth 'yes, if we can ever get your sister away from bloody Hook-a-Duck!' at which point we pretty much gave up on directing Totsy anywhere else and Mr T went off to purchase tickets for Milly and Tinker to go on a ride (it was £3 for the little kids rides so a total of £6 per ride which was expensive but not extortionate). Pretty much as soon as Milly and Tinker got on a ride Totsy decided she wanted to go with them, she was finally prised away from circling Hook-a-Duck but was now  grumpily watching her sisters on a flying elephant ride which was half way through! 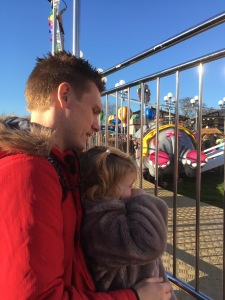 After a couple of rides, we decided a toilet trip was needed (I was surprised to find the toilet facilities were absolutely spotless with no queue at all) and then we tried to steer Totsy in the direction we wanted to go to explore – she was frankly not having this at all, and everyone got a little bit frustrated (I say 'frustrated', what I mean is I eventually picked her up and tucked her under my arm muttering 'right, let's put the baby back in the f**king buggy and never let her out' while she kicked and screamed, and I stopped muttering obscenities just long enough to smile sweetly at the nice man who stopped to pass me Totsy's boot which she'd kicked off – you get the picture!) Fortunately at this point we passed a stall selling chips, and there isn't many situations that a few cones of chips can't improve, so peace was restored!

After chips, we headed back to the circus tent for (what else!) The Circus. I was a bit nervous that expecting the girls to sit still for another 30-40 minutes might be pushing it a bit, but actually they were fine (and when they got a bit fed up, I sent Mr T off to fork out a fiver for a bit of light-up plastic, and they were fine again!)

It was similar to every other circus I've ever been to (which is not that many) with just about the right mix of cheesy slapstick and impressive stunts.

After the circus, we retrieved the buggy, strapped Totsy in (who promptly fell asleep) and managed to explore properly. There are lots of rides for all ages, fairground stalls, plenty of German market type stalls, loads of bars and food stalls, you could see Santa, or go ice skating (booking advised) or just wander around soaking up the festive atmosphere.

Tinker and Milly went on a few more rides, we got hot spiced apple drinks and before we knew it it was time for us to go to the Magical Ice Kingdom. We were a bit early (our time slot was 3pm and we arrived 20 minutes early) but this wasn't an issue, and after queuing for a minute or two we were in. You would expect it to be cold, but seriously it was sooooo cold – like walking into a freezer. The ice sculptures were impressive, but it was quite crowded and very slow moving, which wasn't great in the cold. I also expected it to be a lot longer but after 10 minutes or so we were pretty much done, except for the ice slide. Mr T took Tinker to queue up for the ice slide, while me, Milly and Totsy waited to capture their photo. The queue was long, and it was over 15 minutes of standing in the cold until they finally slid down (quite slowly, for a slide made of ice it wasn't quite as slippy as you would imagine!)

After Tinker and Mr T finally made their way to the bottom of the slide, we headed outside. It was approximately 4 degrees C but felt so warm after the Ice Kingdom! By this time it was getting very busy and mindful of the fact that we had quite a long journey and it was a school day the next day we decided to head home. 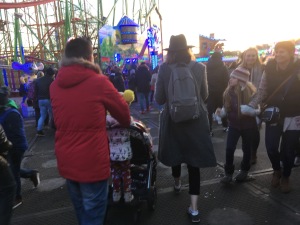 There was just time for me and Milly to stop for Churros on the way out – delicious!

We got the tube back to Euston, and got on the train for Watford Junction. There was only one seat spare and Tinker was complaining about standing so I said she could sit down if she wanted, although I didn't think she would go and sit next to a stranger without me – but her legs must have been really tired because that's exactly what she did! It was only a couple of rows from where we stood and her neighbour was a middle aged lady. I watched as Tinker took the seat, then the lady commented on Tinker's christmas jumper and before you could say 'Don't talk to strangers' they were deep in conversation! I know we should teach them to be wary of strangers but she was safe and I never took my eye off her, and I have to say I was so incredibly proud of my little four year old having a great conversation with the lovely lady sitting next to her, which included all about our day at Winter Wonderland, that she goes to big school, has one little sister, two big sisters and two big brothers and that she loves ice skating and can sometimes skate all by herself. It was super cute and when it was time for us to get off we waved to her new friend from the platform as the train moved on.

Overall we had a really lovely day and we will definitely go again next year, but if I'm honest I doubt I will book for as many shows. It is free entrance and we probably would have enjoyed spending time wandering round soaking up the atmosphere and going on the rides just as much rather than having quite a strict schedule dictated by our booked tickets. Plus when talking about our day Tinker tells everyone the best bits were going on two trains and the rides!

See you next year Winter Wonderland!

One thought on “Winter Wonderland at Hyde Park”