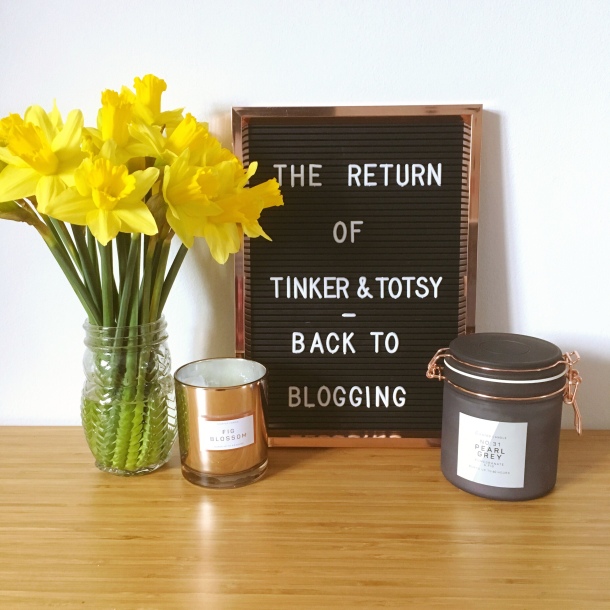 Somehow I have fallen out of the habit of blogging. It hasn’t been intentional, it’s not been a conscious ‘blog break’ decision (though I wish it had been to be honest, so that I wouldn’t have kept feeling guilty and thinking ‘I really should write a blog post…..’) it’s just that life has got in the way a bit! At first I thought it was just the busy build up to Christmas, but then I still struggled to get back to it in the new year, and now it’s already almost the end of March and it’s been pretty much radio silence from me this year so far. In my defence I am a mum of 7 and with the arrival of my grandson in December, I’m now a Nanna too.

There is no denying life is super busy and I have no time to dedicate to blogging (let’s face it, I have practically no time to dedicate to going for a wee, what chance does blogging stand?) There is no quiet space, pretty desk and smart laptop where I can escape to and be creative with a clear head. Instead, I blog almost entirely on my phone (which isn’t even a fancy one, it’s an iPhone 5SE for god’s sake!) usually with a baby grabbing for my phone (or being sick on it!), Boss Baby on in the background (currently dreaming of the day when the question ‘Shall we watch a movie?’ isn’t greeted with ‘Yes! Boss Baby!’ from Freya and eye rolls from me) a toddler constantly interrupting my train of thought because she needs a wee/ snack/ drink/ help with her jigsaw etc and all too often by the time I’ve opened the WordPress app and actually written two lines it’s time to head out on the school run!

When I started this blog one of my fears (and also one of the reasons that actually stopped me from starting it for ages) was that I wouldn’t stick to regular blogging and that it would just fall by the wayside, neglected and forgotten. I’ve been quite surprised that I posted (reasonably) regularly for the first year and a half, but since I stopped regularly posting it has seemed quite difficult to start again. I don’t even know why that is, I always have blog ideas going round in my head, more than I will ever actually get round to writing, I’m sure! The chaotic scenario I’ve outlined above is part of it, but I managed before under the same circumstances, so how come it’s not happening now?

I suppose sometimes it seems like there is no real point, unlike a lot of bloggers, I am not trying to make a ‘success’ of my blog, it’s just a hobby. I see it mainly as an online diary, something in my own voice that hopefully the kids will enjoy looking back on in the future. That is after all, the reason I started in the first place. And that’s why I want to get back into it, for them (plus, Nathan told me in no uncertain terms that I can’t just start a blog then abandon it, I’m pretty sure he’s my biggest (quite possibly my only) fan!)

So, I will be attempting regular (maybe weekly) posts, my previous series ‘A Week of Smiles’ will be replaced with ‘The Smile Files’, same content, i.e. highlighting all the things making me happy, but without the pressure to post one of these every single week which will hopefully leave room for other kinds of posts too.

So there you are, I’m officially back to blogging, better get some actual posts written then, hadn’t I?!