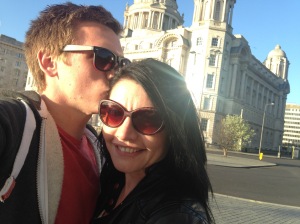 It's Mr T's 33rd birthday today (which makes him 9.5 years younger than me, go me! Who said cougar??) Weekday birthdays are a bit rubbish, especially as it has fallen on a Wednesday which means he will have to stay for a late meeting after work and will probably be home just in time to help put the girls to bed if he's lucky. This morning was a rush of him trying to get ready for work and open presents (although I did take on his usual morning duty of making tea, letting the dog out and emptying the dishwasher just to make it extra special, haha!) and trying to get me and the girls ready for the school run whilst stopping them from opening all his presents for him (the last bit was a huge fail, they opened pretty much everything!) He seemed happy with his presents, especially his new Nixon watch which he has had his eye on (he has a bit of a watch obsession – if we won the lottery his first purchase would not be a flash car, exotic holiday or a mansion, it would definitely be a watch!) and his word art picture which is now a bit of a tradition, I get him one every year (it's basically a picture made up of all our names and lots of other words and phrases that reflect our lives currently, this years is a colourful rainbow word picture). Due to his late meeting we won't do anything special tonight (we had a big family early birthday dinner last night) and in many ways it is just another day. So I thought the least I can do is give him a little shout out on my blog!

I know it is traditional to moan about other halves, they are selfish, lazy, don't help with the kids or do their fair share around the house, don't understand how tough it can be for mums, just don't get it etc etc but I honestly have absolutely nothing to complain about. Believe me, I have had husbands who are more than worthy of a moan so I totally get it, but that is not my life anymore!

We got together after 5 years of working together, both of us were still dealing with the aftermath of our recent marriage break-ups and the timing probably wasn't the best, but one drunken night out, Mr T plied me with vodka, we kissed and (when we realised this wasn't just the usual cliched drunken work-do kiss that makes Monday morning a bit awkward and is best forgotten about as soon as possible) everything changed for us. And I'm so so glad it did. Sometimes I think if that night had never happened then we might have carried on as just good friends forever which is pretty weird to think about! In all fairness it did take a little while to adjust, we had been colleagues (he was actually my boss – he still is!) and friends for a long time, and honestly had never even had a remotely flirtatious relationship and so the shift to becoming a lot more than that was a bit odd, more for me than him (I sometimes would think to myself 'this is Dave, you know Dave from work, your mate Dave, is this really how you feel?') while somehow it felt perfectly natural at the same time. Obviously there were questions, what about my kids, what if we fell out and had to work together, what about the age difference, what about dealing with our exes etc etc. But I think the fact that we had spent the past few years sharing an office just the two of us meant we knew each pretty well and so we just worked it out and the rest is history, as they say.

He is everything I ever wanted and I truly wish we had realised sooner we were meant to be, but that said I also think if we had got together sooner it mightn't have been quite right. Somehow things fell into place for us and I count my blessings for that. It is without a doubt the easiest, most uncomplicated relationship I've ever had.

Before we got together his life was very different to now, no kids, free time to do whatever he wanted whenever he wanted, disposable income and no real responsibility. Being with me has certainly changed all that!! He was pretty much thrown in at the deep end as with a family as big as ours there is no other option! He has taken it all in his stride, he is amazing with all of the kids and does so much for all of them without ever complaining. Seeing him with all of them made the decision to have a baby of our own a very easy one and he is just the best dad and stepdad ever! He is very hands on, he's not just there for the fun times, the rough and tumble etc he is involved in everything from nappies to tantrums with the little ones to dishing out support and advice and playing taxi to the older kids. It has become a bit of a joke between us that he could walk away any time and then he could buy himself the new Golf GTD he hankers after and have a little house (with a little mortgage!) but he sometimes out of the blue will give my hand a squeeze and say he wouldn't swap us for a Golf, which always makes me smile (of course, that tends to be when the girls are being super cute or when all of us are together laughing our heads off at nonsense that no one else would get – though on the bad days I can see him with a faraway look in his eye dreaming of a life with a little house and a brand new Golf, but to his credit he's stuck with us!)

Family life is very much what we are about and I am lucky to have him by my side for everything. We are 100% a team, we don't waste time arguing about whose the tiredest, whose turn it is to change nappies, do bathtime or empty the dishwasher, we just get on with it and both pull our weight in different ways (I do most of the cooking and cleaning, he does all the house maintenance and fixes everything (I call him my little fixer as he can turn his hand to pretty much anything!) and we share the laundry and child care between us. But family life is not the whole of our story. We take time out to appreciate being together, even if this is just time snuggled on the sofa or a quiet dinner at home once the kids are in bed rather than elaborate date nights (although we do those too sometimes). We celebrate each other's successes, give each other freedom and space to do things that we want to and support each other through everything. He always makes me feel so loved and I hope he knows how much I love him too.

This is definitely the biggest compliment I can give him but I really hope all of my girls will one day find someone just like him, someone who cherishes them, puts their happiness first and someone who makes them be the very best version of themselves. I hope they don't settle for anything less. He is proof that guys like him are out there but I know (from bitter experience!) that there can be a few frogs to kiss along the way!

I think this is the first picture of us together (great photobomb Milly!) Yes we were skinny back then – but I don't recommend the divorce diet that we had both been on! 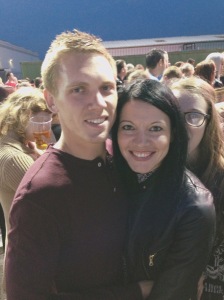 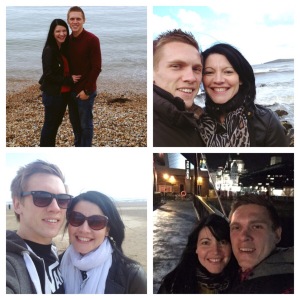 Becoming a dad for the very first time – if he looks a bit pale it's because he almost fainted straight after the birth, which I never let him forget! (I think he just realised he's never getting that Golf…) 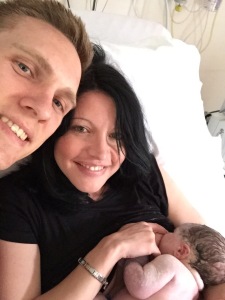 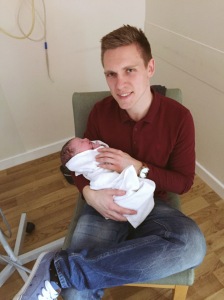 And a few family snaps for good measure……

And of course, the whole circus….. 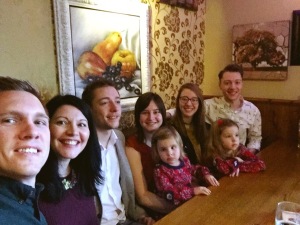